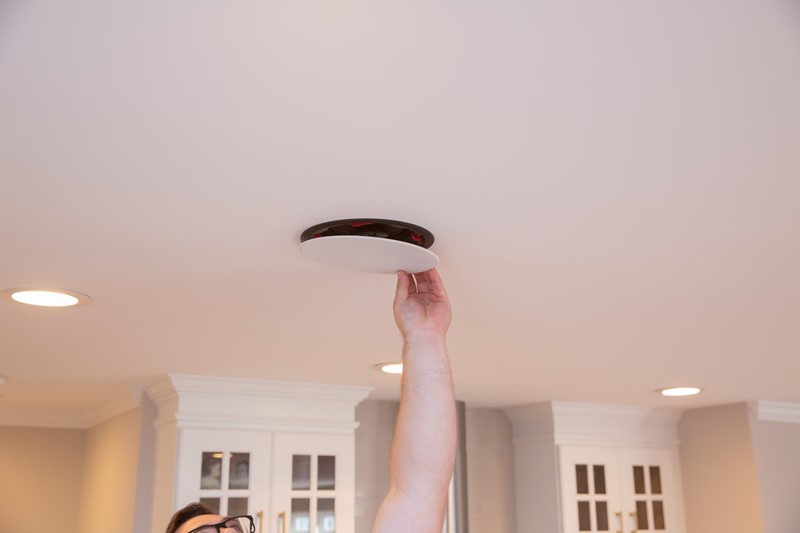 (This is the second in a series of articles about home audio systems. Our goal is to help you better understand the types of systems that are available as an option when you are building a new home. To read the first installment click here.)

When you have had the chance to experience a distributed audio system, like you find in a homebuilder’s model or parade home, you can begin to appreciate how having music in a space can make it more welcoming. While a distributed audio system and a surround sound system both can employ speakers that are mounted into the ceiling, the application is different. Distributed audio systems are primarily for music, which uses two speakers for stereo rather than 5 or more for surround effects. For smaller spaces, the left and right channels are sometime combined into a single speaker.

A common mistake that we try and correct with our customers is assuming that a single pair of speakers will cover a large area like a combined great room and kitchen. Similar to how a light fixture can be turned on in one room and seen from another, audio will flow from one space, but it will not necessarily be of the highest quality, and will never be an ideal volume in the entire space. We highly recommend in these types of combined rooms that you plan for a pair of speakers in each area.

Just like with surround speakers, you will also need an amplifier for your distributed audio speakers. Commonly, we see clients use a device like a Sonos amplifier or in some cases an AV receiver that allows for a second zone of stereo audio elsewhere in addition to the room with surround sound. It is helpful to think about the number of streams of audio in correlation to the number of amplifiers you will need. For example, if you will be playing the same music stream in your great room, kitchen and deck, but want a different stream of music playing in your master bedroom and bath, then you will need 2 amplifiers: One for each stream.

When we are sharing an amplifier among multiple rooms (like the example above), then we use volume controls to allow us to balance loudness, or completely turn off an area within a music zone or sub-zone. This lets you make sure that the music is at a comfortable level throughout the space or turn off an area like the deck if you are not using it. Many users find that once they have a volume control set to the appropriate volume that they rarely have to adjust the volume controls unless they are turning a zone off.

Although you can use tabletop speakers or speaker bars from a number of manufacturers, built-in distributed audio systems typically use flush mount speakers for a clean professional look and also eliminating the clutter of wire and tabletop speakers in each room. (Look for our next blog posting to learn more about these options.)

A distributed audio system as we have described can bring lasting delight to your new home. These systems are robust (we provide a lifetime warranty on our speakers), making them a great addition for music lovers who are building a new home.

(This is the first in a series of articles about home audio systems. Our goal is to help you better underst...

How Much Speed Do I Really Need?

Bandwidth, simply put, is how fast the Internet comes into your house. Bandwidth is measured in Megabits pe...

Rapid Rise of Voice - The Adoption of Voice Assistants

See which tags match your interests. Create an account today