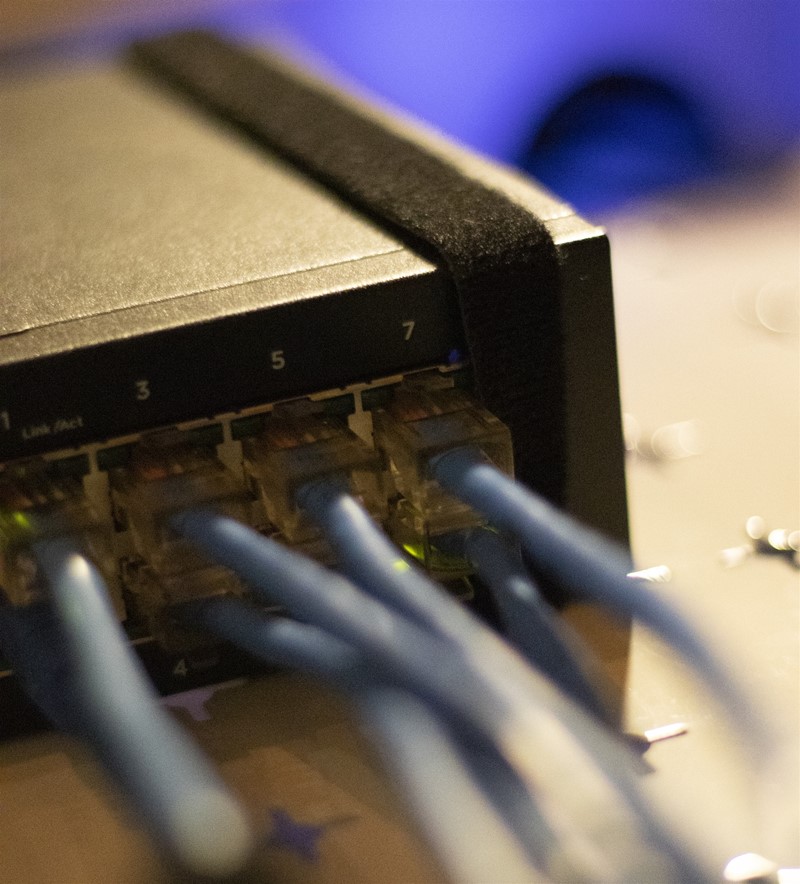 With the number of Internet-connected devices in homes today, it is helpful to have a basic understanding of networks and how they work. With this knowledge, we hope that you will be able to make the best selections at your technology design session.

The wireless router that is commonly provided by your Internet service provider has four devices built into it. First is the modem, which provides the communication connection between your home and your ISP and the Internet. The modem then feeds the router, which acts as a traffic cop for your home network. The router tells data how to travel within your home as well as the best pathway to take to your modem. The third item is called a network switch, and if you have ever connected a computer using an Ethernet cable, then you have connected to a switch. Generally, the network switch on a wireless router is limited to 2-4 ports, but this can be expanded by installing a larger switch. Finally, wireless routers also have a wireless access point or WAP. This generates the network in your home that allows devices to connect without a cable.

The cabling for a data network is frequently called Ethernet. We pull Ethernet cabling inside walls and ceilings that terminate at specified locations on wall plates called ports. These areas can be for computers in an office, a smart television in a great room, or anywhere else where you have a device that can plug into the network. The data cable that we use is referred to as category cable and is generally either a Cat5e or Cat6 cable.

With the abundance of devices in homes that are connected to Wi-Fi, we recommend that stationary devices be connected to a wired data port. This can include devices like a desktop computer or television, but can also include streaming boxes (AppleTV, Roku, Amazon Fire HD) or game consoles. When a device is attached to the wired side of a network, the bandwidth of the wireless network is preserved for those devices that have no other connection option.

Builders vary in their standard data cabling. For those builders that use Cat5e as a standard, HomeRun Electronics offers an upgrade to Cat6. Regardless of cable grade all of the data cabling in the home will match; if a Cat6 upgrade is selected, all data cable runs in the home will need to be upgraded.

A Cat5e cable is capable of up to 1,000 megabits (gigabit) of bandwidth under ideal conditions. Physical factors that can affect this maximum are cable length, proximity to radio frequency and electrical interference, and failure to adhere to minimum bend radius.

A Cat6 cable is capable of up to 10 gigabits of bandwidth under ideal conditions. It is affected less than Cat5e by physical factors. While Cat5e cable is adequate for most current needs, Cat6 provides the extra bandwidth capability that will likely be needed in the future.

Another common networking recommendation is to consider areas where a wireless access point (WAP) may be useful. A WAP is an antenna for Wi-Fi signals that is wired directly to your router or network switch. Having one of these antennas close to where you frequently use wireless devices can ensure that your signal strength and bandwidth is optimal. A WAP is superior to an extender because an extender is only amplifying the signal it receives at its location. Since bandwidth is reduced with distance from the primary WAP (commonly at your router) adding an extender is effectively amplifying a poor level of bandwidth. As you are planning for your new home, consider wiring for a WAP on every level.

Note that while HomeRun Electronics can provide some networking hardware during our design consultation, these devices require Internet in order to work. As you are preparing to move into your new home, we recommend that you contact us to coordinate installation of these devices. Even if you have not chosen to include these in your builder selections, we can still assist you with network products through our Continuum Care program. This program not only offers networking hardware, but also many other audio-visual components as well as security services. Your HomeRun technology designer can help you with these items to make transitioning to your new home as smooth as possible

When you first move into your new home, getting your TVs, network, and related items up and running can be ...

Connectivity in Your New Home

Connectivity is a basic requirement for a new home. Whether it’s a cable or satellite service, Intern...

How Much Speed Do I Really Need?

Bandwidth, simply put, is how fast the Internet comes into your house. Bandwidth is measured in Megabits pe...

See which tags match your interests. Create an account today